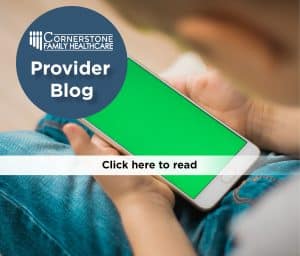 A new study in JAMA PEDIATRICS published this week provides even more evidence that screen time introduced at an early age is developmentally damaging for children.

The new element of this study is it sought to answer the “chicken and the egg” question.  Is increased screen time at an early age associated with developmental delays or are children with delays receiving more screen time because of their challenging behavior?

The study observed 3,388 children in Alberta Canada and measured their development in communication, motor skills, problem solving and social skills at 2, 3 and 5 years of age using a standardized tool.  The results suggested that screen time is likely the initial factor.  Greater screen time at 2 years old predicted greater delays at 3 years old.  Similarly, greater screen time at 3 years old was associated with lower developmental scores at 5 years old.  However, the opposite wasn’t true – children who were already delayed weren’t given more screen time.

The American Academy of Pediatrics (AAP) already recommends avoiding screen time for children less than a year old and 1 hour per day for children older than 2 years of age.  The AAP states that children younger than 2 years of age need hands on exploration and social interaction with their trusted caregivers to develop their cognitive, language, motor and social emotional skills.

Because young children’s brains are not fully developed they cannot learn from digital media as they do from interactions with their caregiver.  Screens cannot teach impulse control, emotional regulation or creative thinking which are best learned through play.  These are all skills that make a child ready for school.  In fact, 1 in 4 children are now showing delays at school entry and tend to worsen rather than improve over time.

Obesity is another concern related to screen time.  BMI has been shown to increase for every hour per week of screen time. This can be related to decreased activity, but also exposure to food advertising and eating while watching television.

Ninety-eight percent of U.S. homes are now connected to the internet but nothing can replace a human interaction with a parent or caregiver.  The language and social delays we are seeing are likely from the decrease parental interaction when screens are in use.  Shutting down digital devices and getting on the floor and playing is still the best thing we can for our kids.

I feel like I'm not alone in anything that I'm going through. I always have a listening ear.

The WIC Program is like family. They are very personable.

My best experience with Cornerstone has been the eye doctor and her staff.

Because of Cornerstone's dedicated care team, we were able to lower my blood sugar.

There was no judgement. Each caseworker gave exemplary service with genuinely caring concern.

My thoughts and feelings are respected in any situation.

The Dental Department is an outstanding team. Thank you for everything.

I travel from Dutchess County because of the service.

I got everything that I needed at the time I needed it."

I like Cornerstone because all doctors are located at the same center and it is very convenient for me."

I always feel cared for when I’m seen."