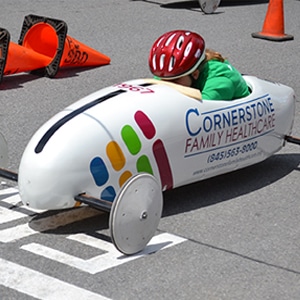 June 12, 2022 – The Port Jervis Soap Box Derby is BACK! After a two-year hiatus, Port Jervis is proud to welcome back this historical racing tradition that has become a part of the community’s fabric.

This year’s derby will be held on Sunday, June 12th on Sussex Street in Port Jervis. Racing begins at 8:30am, with opening ceremonies at approximately 12pm followed by racing throughout the day and closing celebrations at approximately 4:30pm.

After it ceased in 1957, this spectacular gravity racing event was resurrected in Port Jervis in 1999 and since then, thousands of children have raced in the local derby. Remarkably, the event has grown to become one of the largest local derbies in the world!

Children as young as 8 years old compete to become one of Port’s champions who then go on to Akron, Ohio to compete in the International Soap Box Derby Race. This year, area youth will once again compete in various divisions – Stock, Super Stock and Masters as well as the Super Kids division, which is uniquely designed for children with special needs. A Champ in each of the four divisions will win a trip of a lifetime to represent Port Jervis in the International Race in July.

In addition to racing, the day’s festivities will include several food, activity, and craft vendors along race hill while hundreds of spectators look on and cheer for their favorite drivers.

The 2022 Port Jervis Soap Box Derby is presented by Cornerstone Family Healthcare. Our Port Jervis location currently offers family and internal medicine, behavioral health, OB/GYN, and WIC (Women, Infants and Children) services. We are offering in-person patient visits while this location is under construction. Our dental services will reopen once renovations are complete.

The derby is also generously supported by many other sponsors including The Mohican Inn, ShopRite, M&T Bank, Bon Secours Community Hospital, the Outdoor Club of Port Jervis and Technically Creative. The Port Jervis Soap Box Derby is incredibly grateful to the City of Port Jervis for their continued support.